When the going gets tough… the tough get going!
It’s a classic phrase but, in reality, those with clarity of vision – and the right sense of purpose – can see opportunity precisely at the time when convention tells us to either get out or, at best, hold back and be careful. I’m fortunate to have found myself working in an investment company run by people who go against that conventional “wisdom”. I’m among people who say, “Don’t get going – go shopping!”

You might think I’m talking about seeking distressed investment opportunities, where traditionally a company might be facing negative earnings and depleting cash flow… or perhaps high debt, often during a time of economic downturn. This kind of situation presents opportunity for certain types of investors who may have readily available resources and, perhaps, no specific time pressures in seeking a positive turnaround. That strategy is largely based on the idea that someone is in trouble… meaning there’s a chance to buy low – perhaps very low.

I’m actually talking about something a little different. I’m considering situations where good businesses find themselves at a cliff edge largely because certain, perhaps uncontrollable, factors have pushed them to that point and most investors are looking away because they are reluctant to dig deep enough to find a feasible, long-term solution. This is not about a private equity flip based on making a quick killing. This is about finding a fix where those down on their knees are given the chance to stand back up and turn things around.

This kind of approach, based on conscious and collaborative capitalism, is about making businesses whole again and allowing them to serve all the stakeholders involved – top to bottom. Sadly, it’s still too rare – and the outcome is that the workers at the bottom become commoditized with no real concern for their livelihoods. They cease to become individuals, humans, members of society, and are simply considered numbers to juggle when calculating the bottom line.

That’s a dangerous premise when considering population predictions for the planet. The United Nations puts world population at one billion people back in 1800. On 14th September, 2011, at the request of then-UN Secretary General, Ban Ki Moon, and the Executive Director of the UN Population Fund (UNFPA), Dr. Babtunde Osotimehin, I moderated an event at the UN Headquarters in New York to mark the “7 Billion Actions Initiative”, marking the world now becoming home to that many people – a massive jump for just two centuries.

If the planet is to survive in any recognizable form, people cannot be treated as commodities. That’s why capitalism needs to be put back on track. Real capitalism – a tool that can lift everyone when applied the right way. Not the cynical and irresponsible capitalism of greed that seems to have evolved – perhaps devolved – into the dominant form across the planet.

When I joined the DSA Group, initially as Head of the DSA Foundation before taking on the additional role of Chief Communications Officer, I was looking to be part of an organisation that took real capitalism seriously. I remember a balmy evening in April of 2019 at the Capital Club in Dubai, serendipitously reconnecting with the Group CEO, Manoj Narender Madnani, after more than a decade. He and I ended up talking about conscious capitalism for more than two hours, where he told me his philosophy for business was that it should follow the principle that 1 +1 = 11. I told him that I was in the process of writing a book called, “Die Poor (Coffins Don’t Have Pockets!)” – a hard look at how individuals and society relate to money and wealth accumulation.

That unplanned conversation led to me joining Manoj on his mission of investing in projects where 1 + 1 = 11. That’s how he does his “shopping”.

DSA seeks out projects where a fundamentally good businesses have found that the going is getting tough but, with the right level of investment and definitely the right team, there is the real prospect of making things not just whole again but redefining what the business can achieve in the long run for all the stakeholders.

Let’s be realistic… it’s not an easy proposition to co-opt investors to think in those terms nowadays – to be patient and see potentially remarkable results but results that might take time and effort. There are many out there looking to make a quick killing, especially when the world finds itself facing VUCA more than ever! 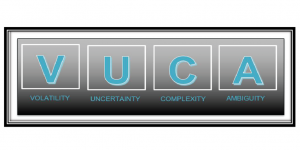 I’m writing this at a time when, globally, the geopolitical map represents VUCA at the highest level… from turmoil in the politics of the USA, UK and EU, and across parts of the Middle East, to an era where climate change and humanity’s response to it is at the top of the agenda. For some, the going really is getting tough!

To get some perspective, we should go back more than three decades to the mid-1980s when Warren Bennis, an American author and scholar widely considered a leadership guru, wrote about VUCA with his fellow co-author, Burt Nanus. The concept of VUCA was established to serve as a guide for organisations so that they could put their performance into a more structured perspective and then modify their behaviour to respond to the prevailing, challenging environment. VUCA also became a term adopted by the military in response to what was defined as a volatile, uncertain, complex, and ambiguous world in the wake of the collapse of the Soviet Union and the Cold War ending.

The incredibly rapid rise of global connectivity and the information age, with the arrival of the worldwide web, has only added to the challenging atmosphere in which international businesses now operate. Added to that is the reality of a planet increasingly driven (literally and metaphorically) by artificial intelligence, and millions of humans facing the prospect of losing their due to automation. The recipe for disaster is becoming a rather obvious one.

Optimists believe that something can be done. Redefining business practices to be more inclusive and fair across the stakeholder set, so all benefit rather than just a sliver of those at the top… up-skilling workers to change their abilities to suit new kinds of tasks and employment… using constantly evolving technology to find solutions… and adjusting human consumption to suit the capabilities of the planet – not strip it bare.

The SDGs cannot succeed without the involvement of big business as well as ordinary people in all corners of the planet. Everyone has to be engaged – everyone is an important piece of the puzzle.

This brings us back to the idea of what conscious and capitalism can achieve when applied with honesty and integrity to include the needs of all… and how the corrupted version of it that so widely exists now, blindly serving so few at the top, can only spin us faster on the downward spiral, deeper into the dark tunnel of VUCA.

The United Nations predicts that the population will be at 11.2 billion by 2100 – a figure well past the 10 billion that is predicted as the threshold for the planet reaching critical failure. It seems, perhaps, that if we don’t do something now, the going is going to get tougher before it gets better!